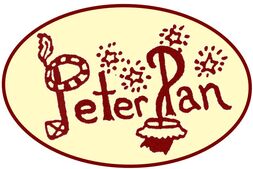 PETER PAN - FUN FACTS
The children of a family friend were the inspiration for the characters of Peter and the Lost Boys in James Barrie’s play Peter Pan, or The Boy Who Wouldn’t Grow Up. When their parents died Barrie unofficially adopted them. Because of his love and concern for children, Barrie gave the rights to his Peter Pan plays and novels to the Great Ormand Street Hospital for children in London.
​THE PLAYERS
Ann Winnard, Nana the Dog, The Crocodile, Smee the Pirate, Tiger Lily, Wendy and Peter Pan
(Yes, she plays both. Watch and see!)
Steve Seyfried, John, Tootles (one of the Lost Boys) and Captain Hook 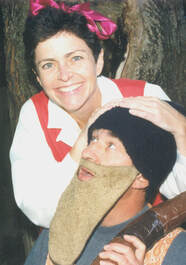 SNOW WHITE
The two-actor version of Snow White premiered at the Rehoboth Summer Children's Theatre On July 8, 1986. The show was written and performed by company founders Elise and Steve Seyfried. The couple searched for a fresh approach for the well know story. They ultimately decided to tell the tale from the dwarves' point of view.  Mr. Lumpy, the head dwarf, in this production tells the audience: "Big people are trouble and it's always the little guy who has to save the day."

After the 1986 opening, Snow White has been performed multiple times through the years in Rehoboth and at at Family Stages in Pennsylvania. This production was filmed in Pennsylvania in 2010.
​THE PLAYERS
Steve Seyfried, Mr. Lumpy, Huntsman, The Mirror
Shoshanna Hill, Snow White, The Evil Queen    (Yes, she plays both. Watch and see!)