​THE LEGEND OF ROBIN HOOD
The stories of a kind-hearted outlaw who served the poor were first told in England over 800 years ago. As with many legends, it is likely that they began with a real person or occurrence. Through, the years, however, the story would change and develop as it was told over and over. Some historians claim the source of the legend was Robin of Loxley, a Saxon yeoman or Robert the Earl of Huntingdon, a noble who sympathized with the Saxons’ troubles.
The legend grew out of the conflict between the Saxon peasants and the Norman nobles who came from France with William the Conqueror in 1066. The Saxons had been farmers and tradespeople and often encountered harsh treatment by the invading Frenchmen. 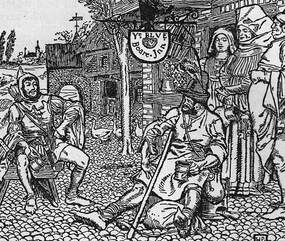 HOWARD PYLE, AUTHOR AND ILLUSTRATOR
Through the years many writers have created their own version of the tale. The version on which the Family Stages script is based is The Merry Adventures of Robin Hood by Delaware artist Howard Pyle. In addition to telling the story, Mr. Pyle also provided a series of marvelous illustrations. His book was first published in 1883 and was a huge success. It remained popular for over fifty years.
Mr. Pyle followed Robin Hood with more adventure books for young readers including The Story of King Arthur and His Knights and Otto of the Silver Hand. He also wrote original fairy tales for younger children which were included in a collection titled Salt and Pepper, Seasoning for Young Folk.

While Howard Pyle was well regarded as an author, he is even better known for establishing the Brandywine School, a major American artist colony in the Chadds Ford, PA area where as a teacher he helped develop painters such as N.C. Wyeth and subsequently Andrew Wyeth (Christina’s World) and Jamie Wyeth (Portrait of a Pig, Island of Roses) as well. 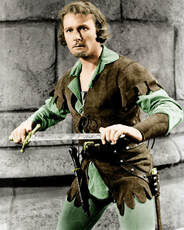 ROBIN HOOD ON FILM
It didn’t take long for the movies to latch onto the adventures of Robin Hood. The first was a silent film that appeared in 1908. A legend in his own right, Douglas Fairbanks starred in the 1922 silent movie. The film that is considered the gold standard of Robin Hood movies is the 1938 version starring Errol Flynn and Olivia de Havilland. Disney produced a live action Robin Hood in 1952. Disney’s animated version in 1973 features an all-star cast with the voices of Brian Bedford, Peter Ustinov, Terry-Thomas, Phil Harris, Andy Devine and Roger Miller as the minstrel. Kevin Costner starred in a later version and Mel Brooks lent his comic talents to a parody, Robin Hood: Men in Tights. 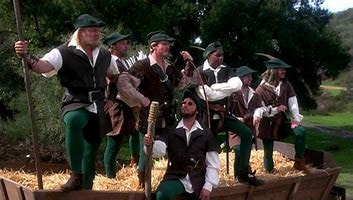